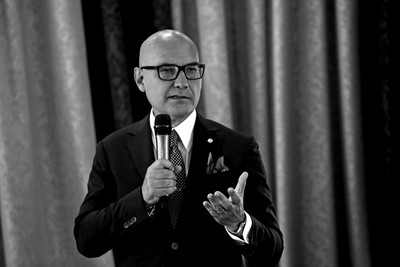 Was born in Rimini on May 17th 1965. His parents, both teachers, really influenced him by passing on to him the passion for literature and reading. “Corriere dei Piccoli” and classic literature novels were amongst his favorites. In 1986 Antonio graduated the secondary school of second grade, while attending one of the first ever experimental classes for beginner programmatic.
Later on, he attended classes at the University of Information Sciences in Milan, but that wasn’t really what he had imagined: an always foggy and cold city, so different from his hometown.

Homesickness and his very first programmatic jobs didn’t really help with his studies, which he soon terminated without finishing his studies. In 1988, after coming back to Rimini, the capitol of tourism, hospitality and innovation, he started with his longtime high school friend Marco Pesaresi, Lasersoft: a software company dedicated to the development of solutions for the Hospitality and Retail markets.
From that moment on, Antonio has been a business owner and an occasional teacher in different professional classes, which is something that he enjoys doing given his passion for teaching and sharing knowledge.

It’s been 34 years since Antonio started dedicating himself to the creation and evolution of the company, as a computer programmer and as CEO, which has now become successful and known internationally for its highly innovative software solutions for the Ho.Re.Ca industry.

Arts, Architecture and Design are his other passions.

Select the day that you prefer

Do you confirm the pre-accreditation for this conference?